Muslims and Politics in India 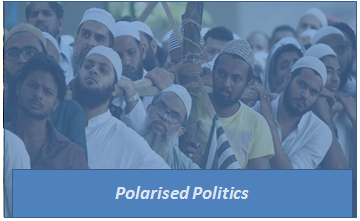 Muslims are always at the center of Indian politics. Some political parties lured them and some offended them for the vote but no party ignored them.

Rajiv Gandhi failed a Muslim women’s fight for social justice and equality. In order to appease Muslim voters and garner Muslim fundamentalist’s support during the election, he passed Muslim Women (Protection of Rights on Divorce) Act of 1986.

Congress has always been at the front foot of appeasement politics. There were many instances which substantiate this point like

For Congress, it seemed Minority was Muslim and Muslims were the only minority.

Rising on the tide of anti appeasement policies of Congress Came BJP. BJP did the same thing as congress but in reverse order. Congress divided Hindus on caste line and lured Muslims for group vote.BJP narrowed the caste line among Hindu to give rise to Hindutva face to garner vote.BJP started taking policy decisions which were close to Muslims in order to garner Hindu support.

CAB clearly discriminates on the basis of religion. The bill has two faces. On one hand, it showcases India’s long tradition of protecting persecuted refugees. On the other hand, it discriminates based on religion. This puts a question mark on Government intention.

The bill does not protect all religious minorities, nor does it apply to all neighbors.

We always supported political parties religious propaganda, So we stand as a looser. Talking about Muslims They were merely used as a vote bank by most of the prominent political parties. Muslim’s socio-economic status shows they have not gained much by there popularity in Indian politics. If you go by 2011 census One in 4 beggars in India is a Muslim. Muslims, come out pretty much at the bottom of most socio-economic indices. Sachar Committee report found high poverty and low literacy levels among Muslims.

Mixing religion in its political campaign and policies might be problematic for constitutional democracy like India. Secularism should not only be the part of the preamble, but it must also reflect in our political, social and economic life.

One thought on “Muslims and Politics in India”