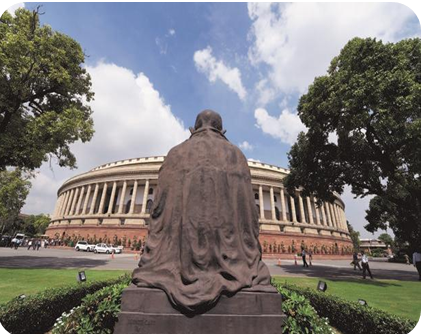 Strong public institutions are the bedrock of flourishing democracy. After independence, many predicted that India could not survive as a single nation. It could never become a democracy either, but it did. Nation after nation crumbled and became authoritarian, but democracy kept running in Indian veins. An independent democratic Indian country flourished not only because of charismatic Indian leaders but also because of Public institutions.

Moderates as an institutional builder, not individual heroism

Moderates took the lead during the early phase of the Indian freedom struggle. Leaders like Pherozeshah Mehta, Dadabhai Naoroji were very critical of colonial administration. They mainly relied on prayer and petition approaches for countering British anti-Indian policies. People have criticized moderates for their prayer and petition approach. There might be a debate on their contributions, but their contribution towards strengthening parliamentary democracy is unquestionable.

They consistently fought for increasing more elected representative seats in both provincial and executive councils. Parliamentary debates, Discussion, petition, etc., were their weapons to fight against the colonial empire. Their consistent effort to make the legislative committee more accountable to people has given us solid parliamentary governance.

Throughout the freedom struggle, people and leaders fought for representative institutions, constitution, universal adult suffrage. Their efforts have given us independent institutions like the supreme court, election commission, Parliament, etc. These institutions are the cornerstone for a thriving democracy. Above all, It’s not an individual but a vital institution that shapes the nation for a very long time.

We are encountering an era where individuals are taking the lead than institutions. Leaders are making popular decisions without considering their sustainability.

USA’s decision to withdraw from the Paris climate agreement, The Unilateral Trade war, etc. In these decisions, popularism was favored over sustainability.

Individual heroism, charismatic leaders, mass following should not be the goal of a great leader. Instead, a true leader should focus on strengthening public institutions to make this world a better place to live. Individuals do not live forever. However, strong institutions do.

Also Read:- The Dance of Democracy

One brilliant example is the honorable supreme court. It has continuously and consistently played its role as guardian of the constitution. It has helped maintain the democratic and secular fabric of our nation.

Institutions like the supreme court, the election commission, CAG, central information commission, etc., are the cornerstone of our nation. These institutions ensure the democratic and secular character of the country. People must realize that they are one of the most essential pillars of democracy. Government behavior towards these critical national institutions should be an essential parameter to judge the government.

Democracy in Pakistan continues to lurk in the dark. Their democratic institutions are not strong enough to counter military rule since its independence.