Crime against women in India 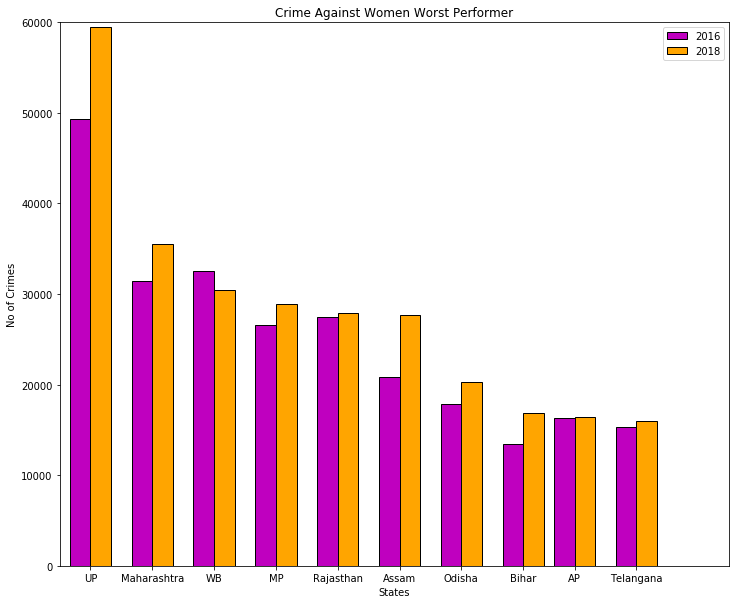 Successive government has repeatedly claimed that his government is committed to women’s safety and security, the data says otherwise.

The National Crime Records Bureau (NCRB) the ‘Crime in India’ report for the year 2018, which showed a shocking increase of 12% in crimes against women when compared to 2016.

Uttar Pradesh topped the list with 59,445 cases, followed by Maharashtra (35,497) and West Bengal (30,394). What is worrisome is the rate with which crime against women is increasing.

Crime against women in Metropolitan

Although crime against women in Delhi has declined compared to 2016, it continues to record the highest number of cases of crimes against women.

Empowerment of women by promoting Gender Equality, Economic Independence and Education for women could be various tools to challenge growing crime against women but government response on these front has been very lackluster. India’s Gender Inequality Index rating of 0.524 in 2017, putting it in the bottom 20% of ranked countries for that year.

Indeed we as a nation are great but not in all front. We cannot be great when thousands of crimes against women go unreported or undocumented due to certain Indian cultural values and beliefs when 2 crimes against a woman are committed every three minutes.

We cannot be great when Female infanticide,sex-selective abortion, Honor killing, Dowry deaths, etc, etc are still prevalent across the nation.

As a Nation Going forward the most important thing we can do against this menace is changing THE PATRIARCHAL MINDSET IN our family.

2 thoughts on “Crime against women in India”