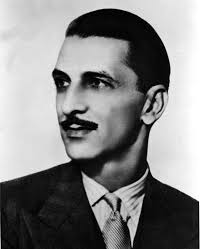 Born in Paris on July 29, 1904, Jehangir Ratnaji Dadabhoy Tata was the second child of Ratnaji Dadabhoy Tata and his French wife Sooni. JRD, as he was fondly referred to all his life, arrived at group headquarters Bombay House to work under John Peterson, director-in-charge of Tata Steel, in 1925.

In 1938, on the death of Sri Nowroji Saklatvala, Chairman of Tata Sons, JTD Tata was catapulted to the head of India’s largest industrial empire.  He was barely thirty-four!  Mr. J.R.D. Tata guided the destiny of the Tata group for more than 5 decades.  He was a great visionary with tremendous personal charisma.  During the 53 years, that he led the Tata Group, he pioneered the Group’s involvement in the airline business, oversaw the early development of the Group’s activities in chemicals, commercial vehicles, computers and software services.  In addition, he successfully led the Group’s growth in the areas of steel and other established business lines.  As Chairman of the Tata Group for 53 years, Mr. Tata lived by the traditions and value system established by the founder, Mr.Jamsetji Tata, and these values have become deeply ingrained in the Tata Group as one of the foundations on which the Group has been built.

At the age of 15 after taking a joy ride in a plane at Hardelot, Jehangir decided to become a pilot and if possible make a career in aviation.  Young Jehangir had to wait nine years.  He was 24 before a Flying Club opened in his hometown Bombay, India – 5,000 miles away from that wind-swept beach in Northern France.  JRD’s passion for flying was fulfilled with the formation of the Tata Aviation Service in 1932.  The first flight of Indian civil aviation took off at Drigh Road airfield in Karachi on October 15, 1932, with JRD Tata at the controls of the Puss Moth that he flew solo to Ahmedabad and onwards to Bombay.

He pioneered civil aviation on the subcontinent, funded Homi Bhabha’s ambition to catapult India into the nuclear age, initiated the family planning movement much before it became the official government policy, and bankrolled efforts to record and preserve for posterity the country’s priceless folk arts.

JRD Tata took the role of a citizen very seriously and never failed to be of service to the nation.  His nation-building activity began soon after he was appointed a trustee of the Sir Dorabji Tata Trust in 1932. The concept of establishing Asia’s first cancer hospital in Bombay was implemented under his guidance in 1941.  Citizen Tata’s greatest gift to the scientific establishment came in 1945 when he gave the founding grant to Homi Bhabha to set up the Tata Institute of Fundamental Research.  This institute has proved to be, in Bhabha’s words, “the cradle of our atomic energy program”. JRD Tata was among the first Indians to be drawn to the cause of population control when he realized the drag unchecked population growth could have on the country’s developmental efforts. In 1951, when he came across statistics revealing that India had crossed the 350-million population mark, JRD sounded out Jawaharlal Nehru (the country’s first Prime Minister) on the issue.  Nehru ignored the issue.  But JRD didn’t wait for the government to act.  He part-funded Avabai Wadia’s efforts to start the Family Planning Association of India.

These measures were introduced at Tata Steel, Jamshedpur, and many more were added during JRD  Tata’s regime.  In 1956, he initiated a program of closer “employee association with management” to give workers a stronger voice in the affairs of the company.  He also introduced a scheme of ex gratia payment for road accidents while coming to or returning from duty’.

In 1970, he started the Family Planning Foundation jointly with the Ford Foundation, and was instrumental in conditioning the thinking of an entire generation, treating the issue as one of the essential transformations of society.  For his crusading endeavors in the field, JRD Tata was bestowed with the United Nations Population Award in 1992.

For these endeavors, JRD Tata was awarded the country’s highest civilian honor, the Bharat Ratna, in 1992 – one of the rare instances when the award was granted during a person’s lifetime.

He passed away on November 29, 1993. On his death, the Indian Parliament was adjourned in his memory – an honor not usually given to private citizens. His home state of Maharashtra too declared three days of mourning.  Though Mr. J. R. D. Tata is no more, the values, traditions and business ethics which he lived by will continue to be the driving force of the Group.  Mr. Tata made his mark on India during his lifetime, and his legend lives on after him.