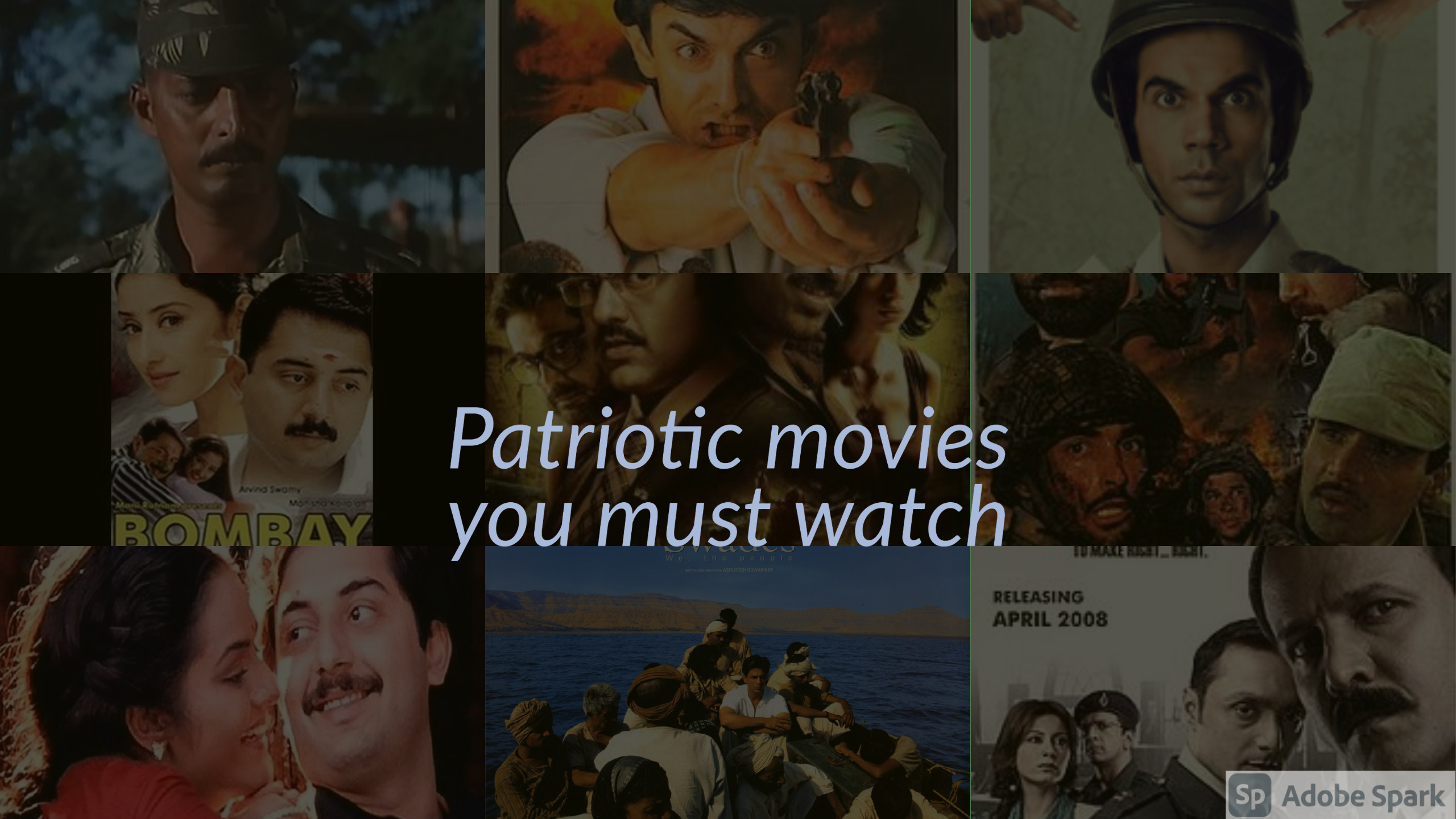 Below is a list of non-glamorous Patriotic movies you must watch. In the 21st century, when Patriotism is taking the form of religious nationalism, these movies widen our perspective of Patriotism.

A simple definition of Patriotism would be Love and devotion for one’s country.

But then the question arises what is a country? for me, a country is a living entity composed of its People, Culture, ideas, Environment, Animals, etc.

So who is a patriot?

Patriots are not always in uniform. A patriot is anyone who inclusively loves all aspects of a country, Someone who imbibes the idea of oneness in diversity, and Someone who keeps self after others.

A true story inspires this Mani Ratnam gem. Roja is masala less, a Sensitive and more realistic movie.AR Rehman’s music, Thrilling plot, and picturesque keep you hooked to the film.

Nana Patekar acted and directed this movie in 1991. The film was nominated for Best Story at the 37th Filmfare Awards.

Nana Patekar is known for his intense dialogue delivery, and he is at his best in Prahaar. The story revolves around a soldier who takes into his hand a social evil.

This movie reflects the intrinsic nature of a village. Brilliant storytelling and screenplay make you feel like traveling with the film. This movie never gets old, no matter how many times you watch it.

This movie always stands tall against all war movies made in Indian cinema. There are many goosebumps moments in this movie; my favorite is when Akshaye Khanna falls into the trench and gets surrounded by the enemy.

Sarfarosh is a 1999 action-packed crime thriller movie. Each and every cast has done their job brilliantly. The protagonist in this movie beliefs in service before self.

The theme of the movie revolves around the court-martial of an Indian Army officer (Javed Khan) for shooting dead his superior officer.

Shanghai is among a few brilliant political thriller Indian movies. The protagonist is an IAS officer who gets in charge of a judicial inquiry. The way he handles political-criminal nexus is worth watching.

This movie starts with Love, moves to politics of religion, hate, violence, and then ends with Love and togetherness. The songs of this movie are as beautiful as the movie itself. The soundtrack of this film is one of the greatest Indian soundtracks of all time.

The movie showcase something which we constantly face in our life, conflict of idealism and realism. We are the world’s largest democracy, but is Indian democracy, is a democracy of the people, by the people, for the people?

The movie also points out how one of the strongest institutions in the country(The election commission) works relentlessly to facilitate democratic rights for every citizen of the country.

Patriotic movies you must watch are splendid gems in Indian cinema that you can repeatedly watch without getting bored.