Where are the sparrows 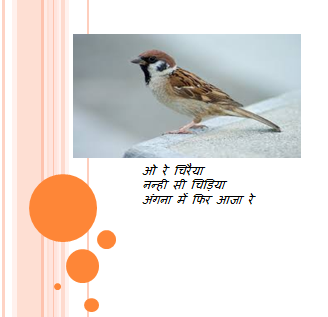 Where are the sparrows? We should ask this question not once but twice. Where are those tiny chirping social species chirping in our courtyard, companion of our afternoon boredom? They were everywhere chirping, chattering as if they have so much to say.

Alas! where are they now? Never in my wildest dream, I thought of longing for the mere sight of my favorite bird. It has been so long when I have spotted a sparrow.

A childhood memory of chirping, chattering sparrows feasting around the courtyard evokes nostalgia.

We have robbed them of their nesting place and food . We have pushed them to the edge of extinction. Now we need to Save Sparrow not only for saving our environment but also ourselves.

Few simple steps which might reduce dwindling sparrow numbers are

1> Do not use chemical insecticides and pesticides in your garden as it is harmful.

2> Keep a bowl of water and some grains for sparrows to feed on.

3> Plant trees in and around your homes to create shelters for them.

4> If possible minimize the use of mobile phones.

4 thoughts on “Where are the sparrows”